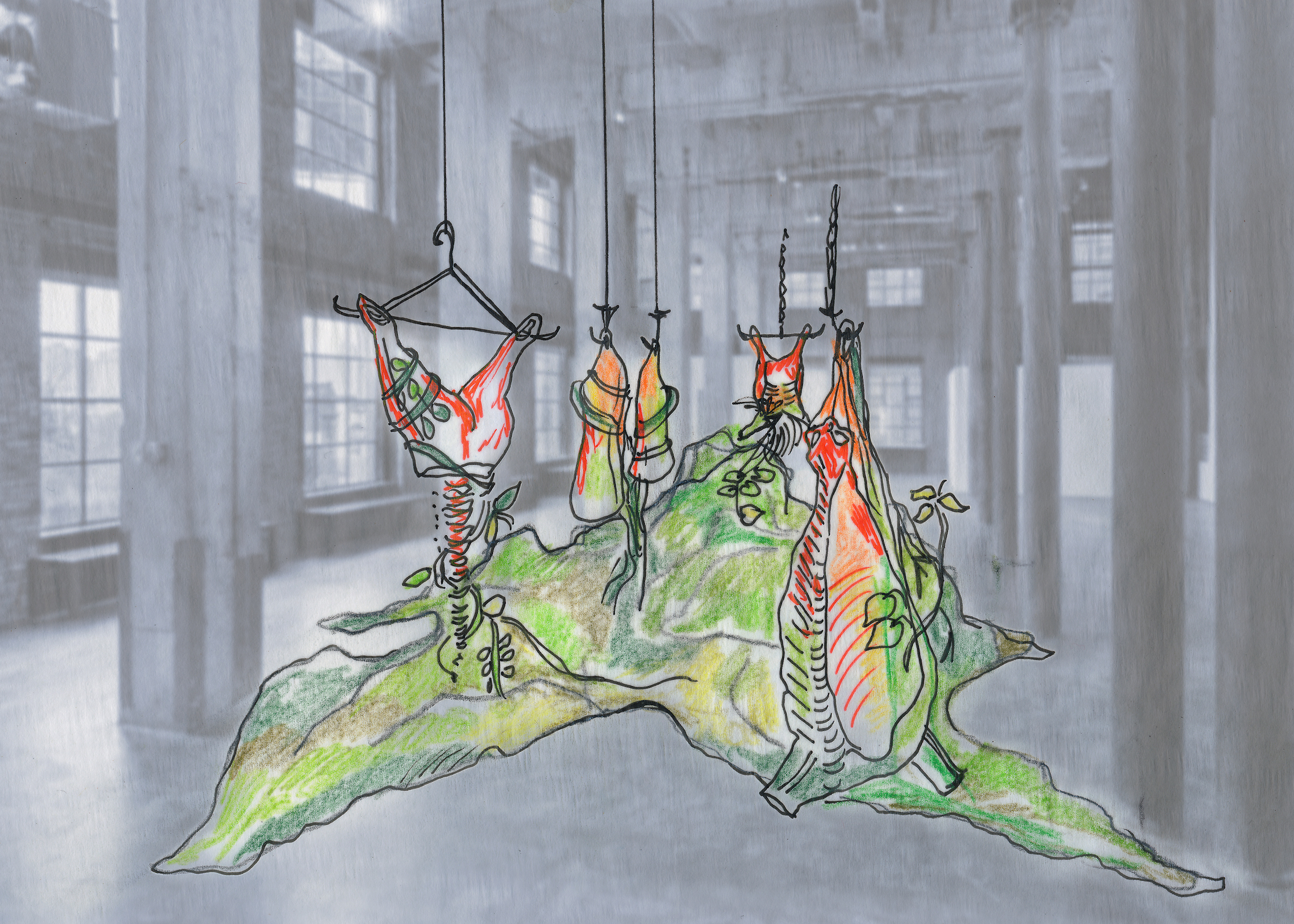 Tamara Kostianovsky, exhibition sketch for Between Wounds and Folds, 2021.

Between Wounds and Folds draws together threads from the past fifteen years of Tamara Kostianovsky’s work and career, connecting issues of gender-based violence, personal memory, and ecological destruction through consumption, to create a complex and speculative ecosystem. Her soft, brutal sculptures combine discarded fabric with industrial materials, often borrowing forms from mutilated fauna and flora in various states of decay, including tree stumps, cow carcasses, and birds of prey.

This exhibition gathers four distinct bodies of work that explore two overlapping formal and conceptual constructs suggested by the title: the wound and the fold. Wounds take shape in the severed flesh of carcasses and truncated tree parts, while the folds compress fabric and flesh, incorporating one living being into another. Her sculptures are literally layered with tight folds of material, uniting the dense histories of consumption within the clothing industry together with the flesh of mutilated bodies. The fabric covering the surface of her works first originated from her own cannibalized wardrobe, and she later used material from her late father’s clothing and upholstery remnants. Kostianovsky viscerally positions the plant and animal forms in relation to human bodies, connecting the destruction of the earth by consumer waste to bodily harm.

Through alternating softness and aggression, her installations identify the nuances of violence that exist between a personal encounter and its normalization on a social and ecological level. Kostianovsky’s work asks for a re-imagination of human rights and environmental redemption models in order to consider the resultant violence as part of a larger, inseparable system. By creating immersive environments out of the remnants of consumer culture, her work goes beyond trauma enacted onto an individual organism to encompass the pervasive destruction by capitalist consumption on the natural world. Her works create a visual proposition for a future in which images of desecrated bodies are transformed into receptacles of regeneration and rebirth.

Opening Reception: Canboulay and Between Wounds and Folds

Artist-Led Tours: Canboulay and Between Wounds and Folds

Closing Reception: Canboulay and Between Wounds and Folds

Mimi Oritsky: Above and Below

Destiny Belgrave: where they go & what they leave