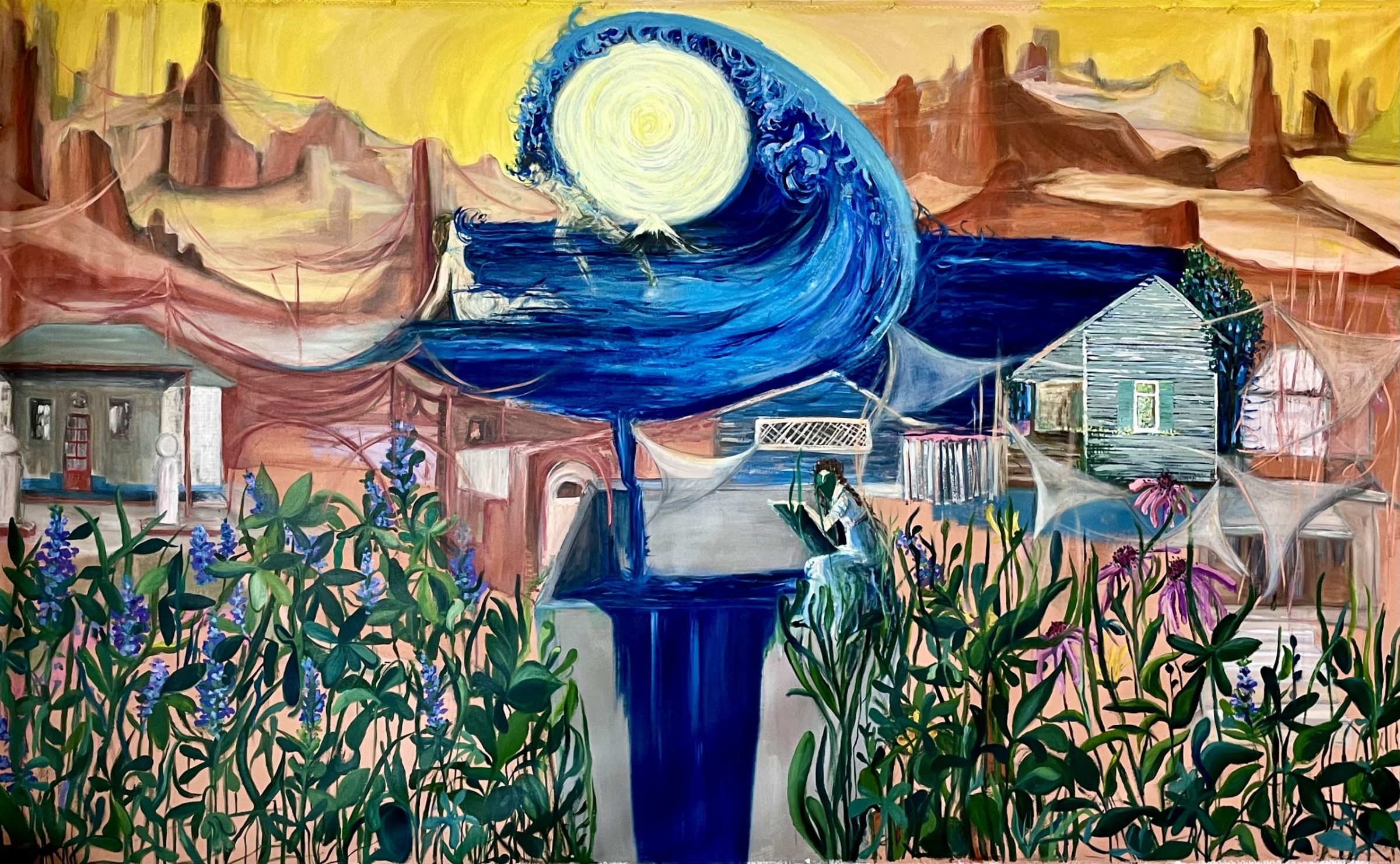 Farima Fooladi’s paintings depict spaces using memory, compressing architecture and landscape from her upbringing in post-revolutionary Iran with those that surrounded her as an adult after emigrating to the United States. In her newest body of work, the artist combines details from Southern Iran’s arid environment with luscious flora and other specifics of her current home in Houston, TX. The resulting paintings present organic and surreal landscapes that capture the transition of a place between feeling familiar and deeply foreign. The exhibition’s title references Ernest Hemingway’s posthumously published memoir by the same name. In the book, Hemingway famously describes his relationship between place and memory, saying, “If you are lucky enough to have lived in Paris as a young man, then wherever you go for the rest of your life, it stays with you, for Paris is a moveable feast.” Fooladi uses this concept to build a framework for the intrinsic attachment connecting her own memories to the places she has inhabited.

The disjointed visual spaces within the paintings grow out of the artist’s experience observing shifting physical and psychological landscapes during changeovers in political power. Specifically, they recall the architectural uprooting and reconstruction in the wake of the Iranian Revolution, as well as the mental and emotional paradigm shifts in American politics immediately following the 2016 presidential election. Crucially, her works do not represent the events of these traumas but stand as attempts to capture the marks that memory leaves on different geographies over time. Compared with the United States, the landscapes in Iran carry a longer expanse of history, combining buildings more than 1,000 years old with more contemporary elements such as swimming pools and matte glass windows. The paintings stand as tethers between the moments that create a personal history, visually collapsing multiple impressions of time onto a picture plane.

In this body of work, water appears as a motif in the form of pools, waterfalls, and lakes. A resource that is scarce in Iran and abundant in Houston, water continues to play a large role in Fooladi’s most recent series as well as in her previous work. It is a texture and a symbol, referencing specific yet undocumentable recollections as well as its own shifting availability due to climate change. In her newer works, which are more subtle and painterly, Fooladi plays with alienation and distance. The architecture fades into the background of the landscape, and the vegetation is idyllic but just out of reach. These paintings propose a progression of time when one can be certain that more memories will accrue and therefore increase the spatial depth. As Fooladi’s frames continue to expand, the world becomes bigger, more chaotic, and more nuanced through the palimpsests left within the edifice of her memory.